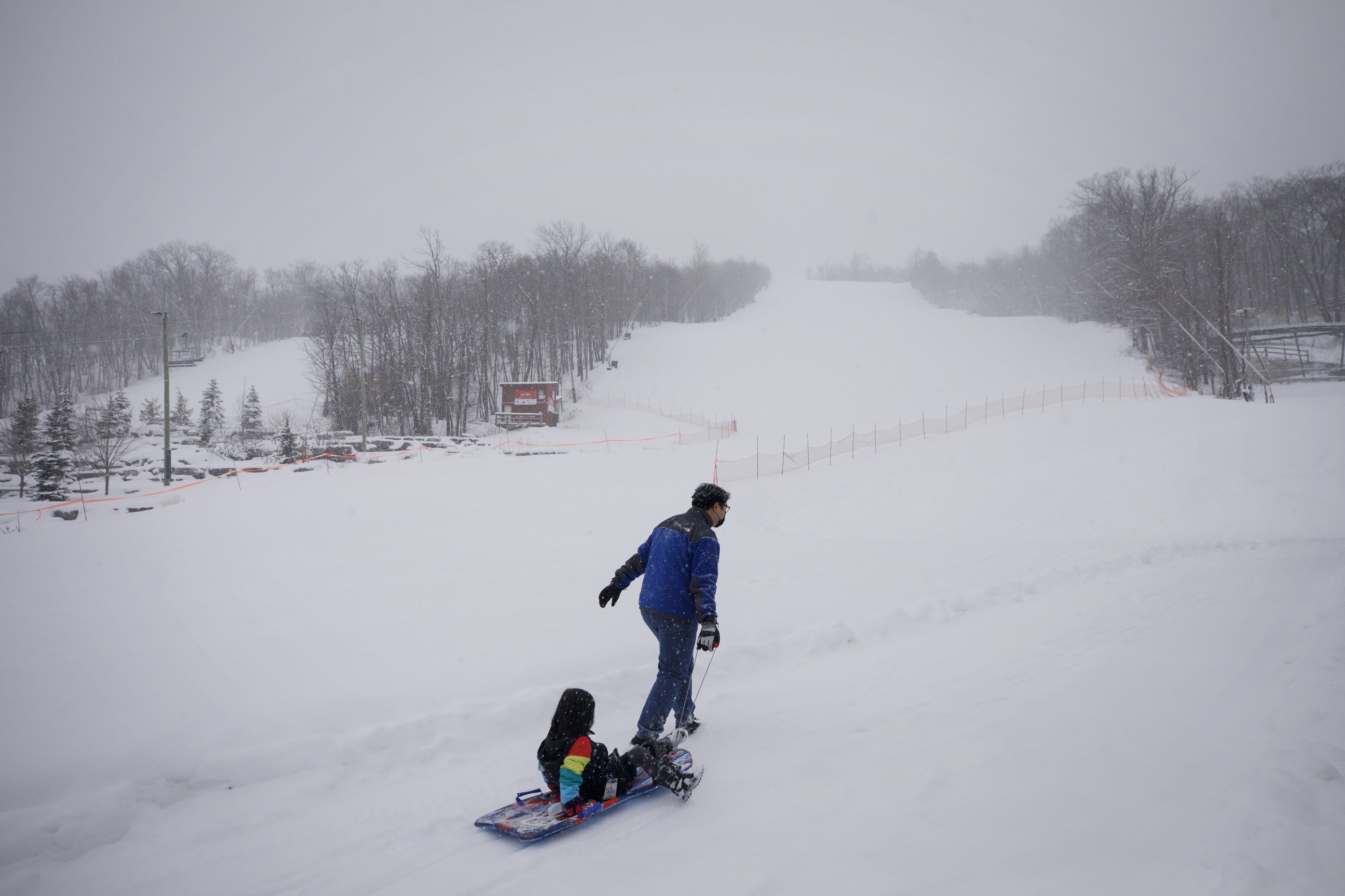 TORONTO — Officials in Canada’s most populous province have confirmed the first two known Canadian cases of of a more contagious variant of COVID-19 that was first identified in the United Kingdom.

The province’s associate chief medical officer says that the cases are a couple from Durham Region, just east of Toronto, with no known travel history, exposure or high-risk contacts.

The new variant is believed to spread more easily and faster than the original version of the disease but is not believed to be more deadly.

The provincial government said in a news release that is no evidence to suggest that the vaccines approved by Health Canada will be any less effective against the new variant. The variant was first identified in the United Kingdom but has since been detected in several other countries, including Denmark, France, Belgium, Australia and the Netherlands.

— Germany, Hungary give first virus shots ahead of EU rollout.

— Around 1,000 British soldiers are spending Christmas weekend trying to clear a huge backlog of truck drivers stranded at the border in southeast England

HERE’S WHAT ELSE IS HAPPENING:

Vladimir Krcmery, a 60-year-old top expert on infectious diseases, became the first person to receive a jab at the University Hospital in the city of Nitra, 75 kilometers (47 miles) east of the capital of Bratislava.

“It’s a great honor for me, thank you” Krcmery said after receiving the innoculation.)

The vaccines were distributed also to three other hospitals in the cities of Kosice, Banska Bystrica and Bratislava.

Front line medical staff in hospitals treating COVID-19 patients are among the first to get the vaccine. President Zuzana Caputova is scheduled to get vaccinated on Sunday.

Slovakia is the second EU country after Hungary that started the vaccination campaign immediately after the vaccine’s arrival. The others plan to start Sunday.

Beginning Sunday, the CVS and Walgreens pharmacy chains and Vida Pharmacy in Albuquerque will administer doses of the Moderna vaccine at nursing homes and assisted living facilities across the state, officials said.

“Sunday marks a monumental day in our fight with this deadly pandemic. It signifies a step towards protecting our seniors and securing their safety,” said Katrina Hotrum-Lopez, cabinet secretary of the Aging and Long-Term Services Department.

The statement noted that people receiving vaccinations will need two doses from the same manufacturer administered several weeks apart. The pharmacies will send staff to facilities three times over the coming months to administer the vaccines.

Data compiled by Johns Hopkins University reported the mark Saturday morning after 472,000 cases were recorded Christmas Day. The number of deaths related to the coronavirus pandemic across the globe stands at 1.75 million.

There have likely been many more cases of the coronavirus that have not been counted for a variety of reasons, including under-reporting, asymptomatic infections and lack of cooperation with contact tracers.

BUDAPEST, Hungary — Hungarian doctors and other workers in the health sector have begun getting vaccinated with the first shipment of the Pzifer-BioNTech vaccines against COVID-19 which arrived in the country early Saturday.

The first shipment of 9,750 doses – enough to vaccinate 4,875 people, since two doses are needed per person – arrived by truck from Austria and were taken to the South Pest Central Hospital in Budapest. The government said four other hospitals – two in Budapest and two others in the eastern cities of Debrecen and Nyíregyháza – would also receive vaccines from the initial shipment.

The government said more batches of the vaccine were expected in the coming weeks, with health sector workers being the first to receive vaccinations.

Since the start of the pandemic, the total number of confirmed infections is 135,114, with 4,553 fatalities.

The numbers of new infections and deaths are quite low compared with recent trends. Officials said Saturday, if this continues, schools might open again on January 8, but not retail shops or restaurants. The decision whether to end or extend the country-wide lockdown will be taken two or three days before January 7, the day it is supposed to end, a minister said.

The government has also published a timetable of the first vaccinations, which will start at 1 p.m. Sunday, with a nurse and an elderly resident of a retirement home being the first ones to be inoculated.

BEIRUT — Lebanon’s health authorities are planning an increase in testing around the country amid a surge of positive cases in the holiday seasons and after the first case of the new coronavirus variant was reported here.

Lebanon has not banned flights from the United Kingdom but asks travelers returning to test at the airport. Pressure from the public and politicians has increased, calling for a ban on such flights. There are fears of a spike in cases expected during the holiday season in Lebanon, where the health sector is cash-strapped and lacks resources.

PHOENIX — Arizona has reported more than 5,000 additional known COVID-19 cases for the 10th straight day, as the surge put a pandemic-high number of virus patients in intensive care beds across the state.

Arizona has the third-worst COVID-19 diagnosis rate in the United States over the past week, behind California and Tennessee.

LONDON — Tough new coronavirus restrictions have begun in the U.K. with Scotland and Northern Ireland under tighter measures to try to halt a new variant of the virus that is believed to spread more quickly.

Measures that were relaxed for Christmas day in Wales have also been re-imposed.

The number of people under the country’s top level of restrictions — Tier 4 — increased by 6 million on Saturday to 24 million people, around 43% of Britain’s population. No indoor mixing of households is allowed and only essential travel permitted. Gyms, pools, hairdressers and stores selling nonessential goods have been ordered to close.

A further 570 deaths from COVID-19 were reported in the last 24 hours, bringing the total death toll to 70.195. More than 32,700 new cases of the disease were reported on Christmas day.

MOSCOW — Russia’s Health Ministry has allowed a domestically designed coronavirus vaccine to be given to people older than 60.

Until Saturday’s announcement by Health Minister Mikhail Murashko, the Sputnik V vaccine was cleared for use for people aged 18-60.

Russia has been widely criticized for giving Sputnik V regulatory approval in August after it was tested only on a few dozen people and then rushing to offer it to people in risk groups — such as medical workers and teachers — within weeks of approval. Authorities said this week that more than 300,000 people have received the vaccine even as the advanced studies among tens of thousands of people are continuing.

Sputnik V’s developers have said data suggests the vaccine was 91% effective, a conclusion based on 78 coronavirus infections among nearly 23,000 participants. That’s far fewer cases than Western drugmakers have accumulated during final testing before analyzing how well their vaccine candidates worked.

MADRID — Health authorities in Spain have confirmed the first cases of the new variant of the coronavirus that was recently detected in the United Kingdom, causing several European countries to restrict traffic with the British island.

Health authorities for the region of Madrid said Saturday that they have confirmed four cases of the new version of the virus. All four of the infected people are in good health, authorities said.

VATICAN CITY — Pope Francis says he is forgoing his public appearances at a window from a Vatican palazzo overlooking St. Peter’s Square to do his part in minimizing crowding during the COVID-19 pandemic.

Dec. 26 is a holiday at the Vatican and in Italy in honor of St. Stephen, the Catholic church’s first martyr. The day after Christmas would usually find thousands of people flocking to the square to catch the pope’s noontime appearance and admire the Vatican’s towering holiday tree.

Instead, on Saturday, Francis delivered his blessing and remarks from the library of the Apostolic Palace, then acknowledged that the faithful had to resort to television to follow him.

TOKYO — Tokyo has confirmed 949 new cases of the coronavirus, a new high for the Japanese capital, as the country struggles with an upsurge that is spreading nationwide.

The Tokyo Metropolitan Government said Saturday that the additional cases bring the prefectural total to 55,851. Japan had 3,823 new cases Friday for a national total of 213,547, with 3,155 deaths, the health ministry said.

Japan has not been able to slow the infections despite government requests for the people to avoid going out for dinner and parties before and during the holiday season.

Tokyo Gov. Yuriko Koike has ordered bars to close early and urged residents to avoid nonessential outings. But many people have continued commuting on crowded trains and going out for dinner and drinks.

CAIRO — Egypt has reported over 1,000 new coronavirus cases, its highest total in months, as authorities appeal to people to stick to preventive measures to avoid a lockdown.

The Health Ministry on Saturday reported 1,113 new cases, as well as 49 deaths.

The new numbers have brought the county’s official tally to more than 130,126 cases, including at least 7,309 deaths.

However, the actual numbers of cases in Egypt, the Arab world’s most populous county with over 100 million people, are thought to be far higher, in part due to limited testing.

Two domestic cases were reported on Friday, a convenience store worker and a Hewlett Packard Enterprise employee. Another two asymptomatic cases were discovered in Beijing earlier in the week. Beijing is conducting testing on a limited scale in the neighborhoods and workplaces where the cases were found.

China has canceled big gatherings such as sports events and temple fairs. Cinemas, libraries and museums operate at 75% capacity. The government is also discouraging business trips.